This will be a complete review of the 2000 Mercury Grand Marquis.  I’ve been very impressed with this 18-year old vehicle. Used cars like the Grand Marquis were never on my radar. I always wanted to own fast European sedans like the Mercedes E55 AMG. But this time around I wanted something different and I didn’t want the absurd running costs associated with old German cars.

The Grand Marquis was restyled with a more vertical grille treatment, a different grille feel, jeweled headlamp ornamentation, and new taillamps. Underneath the car is a totally new framework that enabled the Grand Marquis to make a five-star score for crash standards rear and front.

While the middle of the framework is quite like the old car’s, front and rear extensions are updated and strengthened, and the front and rear suspensions have been enhanced for a smoother, more vibration-free ride. The classic recirculating ball steering system was updated with premium bearings and materials to improve steering response and feel; a power steering fluid cooler was made standard.

The 2000 Mercury Grand Marquis is still a big car, with a base curb weight over 3900 pounds, a 114-inch wheelbase and an overall length of 212 inches. So no matter how great the steering and the suspension and tires are, it still takes some skill and effort to negotiate a grocery parking lot.

The 1998 package (which the 2000 Marquis was part of) includes upgrades to suspension, steering, wheels and tires, brakes, battery life, safety, inside, powertrain, and styling, in a nutshell, almost every area of the vehicle.

The Grand Marquis provides some high tech choices like ABS and traction control. Additionally, it comes standard with dual front airbags, rear-door child security locks, and active side-impact protection. For 2000, the Grand Marquis receives a lot of the security changes that Ford has implemented across the majority of its model lineup.

The emergency trunk release permits individuals that are trapped in the back to release the hatch. The kid seat-anchor mounts at the rear seat provide caregivers and parents a better procedure to buckle in their own child safety seats more firmly. The system secures child safety seats using tethers that connect into the anchor mounts, along with classic security straps.

The $855 handling package, which mine doesn’t have but I recommend, includes a completely retuned suspension with rear air shocks, an enormous rear stabilizer bar, a 3.27:1 axle ratio, the dual-exhaust, 16-inch wheels, and Goodyear high-speed tires. My car has the premium package, but not the handling package. Might have to change that and add that dual-exhaust too!

If you are after luxury and not the sport, options such as automatic temperature control, auto-dimming rearview mirror, and superior AM/FM stereo with trunk-mounted CD changer could have been ordered individually or as part of the ultimate package.

The Grand Marquis is large without being unruly. But there’s a trade-off. You may experience lean in turns and corners. The Grand Marquis also includes Precision Trac, which means that the rear suspension was designed to restrict unwanted sway in crosswinds or hard cornering to get rid of complaints which the vehicle tends to float.

My 2000 Mercury Grand Marquis LS has the ultimate package but not the handling package. I do however have the leather seats and a six-disc trunk-mounted CD changer. While the stereo is clearly out of date, what’s cool is the head unit is a double-din, so you can update to a really nice stereo. 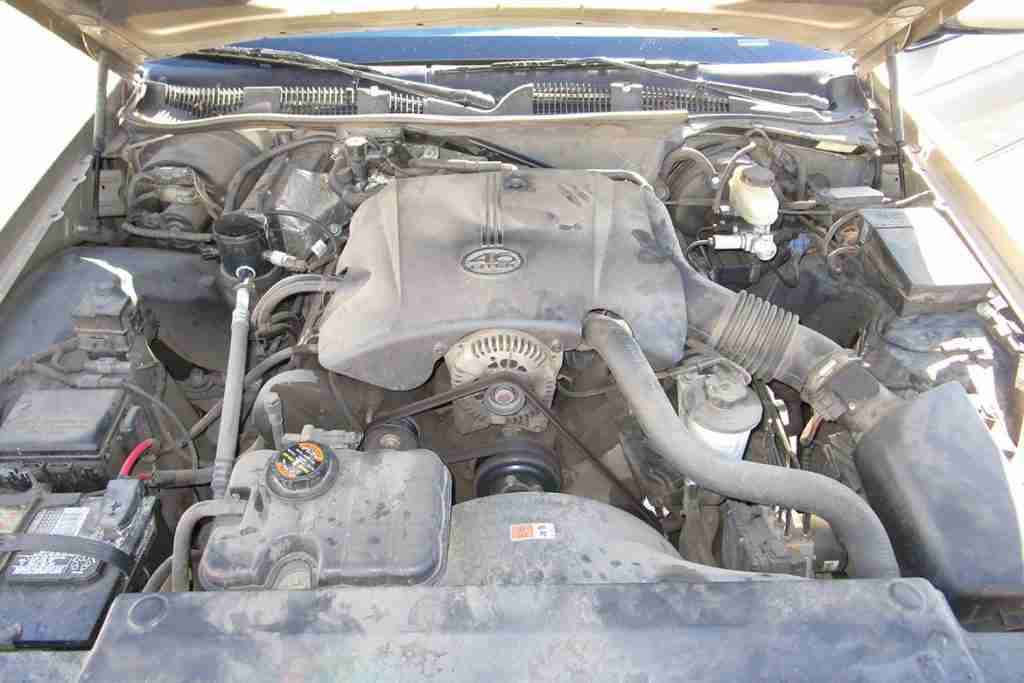 The motor which powers the 2000 Grand Marquis is a 4.6-liter single-overhead-cam V8 which was introduced with those automobiles in 1990, and it was proven to be among the best engines Ford Motor Company has ever built concerning quality and endurance.

The engine was also updated for 1998, and today makes 200 horsepower with single exhaust and 215 hp with all the optional dual exhaust system, a 15-hp rise over previous calibrations. The motor currently has a coil-on-plug ignition that’s easier and more dependable.

Likewise, the 4-speed automatic overdrive transmission designed to partner with the 4.6-liter V8 was shaped up and smoothed out for 1998, with 50 percent faster, smoother, and more positive changes, and no maintenance needed for the lifespan of the car. With this combination, the Grand Marquis is rated as a Class 1 tow vehicle, to tow 2000 pounds continuously.

Wheels have been raised from 15-inch to 16-inch. Steel wheels are standard, aluminum alloy wheels are optional. Special alloy wheels include the handling package. Standard tires are P225/60R-16 all-season radials that ride better and bite better than the tires utilized last year. Brakes, also, have been expanded and updated, with larger, thicker rotors and dual-piston calipers on the front discs for better, longer brake performance.

For 2000, the Mercury Grand Marquis rear suspension was altered substantially to find that quiet, smooth and unperturbed ride. The rear trailing arms, that used to point inward toward the driveshaft, have been reshaped and remounted between the frame and the rear axle assembly to offer control of the axle’s up and down moves.

The rear axle assembly is fitted with a Watts linkage, a simple mechanical connection between the middle of the frame and the axle assembly that locates the axle laterally. Mercury’s Precision Trac suspension system with coil springs and relocated shock absorbers controls the ride. With a single set of bars for vertical motions and the Watts connection for lateral motions, the vehicle is not as vulnerable to wallow and is much less affected by crosswinds as it had been before.

You can’t do a good review of a used car and not talk about common issues and know problems cars have. The 2000 Mercury Grand Marquis is no different. And while this car seems to literally be bullet-proof, the one chink in the armor is a plastic intake manifold that’s known to crack.

Here’s a great video of a guy explaining everything in detail.

While that is a major issue, this is a Grand Marquis, not an S-Class Mercedes. Not only are there permanent fixes, the cost of the repair is reasonable in the big picture. You have something like this happen on an old Mercedes and it would easily be $3500 or more. Easy.

Other than the above issue, the Marquis is solid. I wouldn’t let the plastic intake manifold on these cars be a deal-breaker. It is worth noting that during the major 2003 update, this issue was addressed. So you could also just purchase as 2003 and up Mercury Grand Marquis and sidestep any intake issues altogether.

If splendid isolation is exactly what you’re looking for in an affordable used car, or if you’re planning to cover plenty of North American land on the big highways, the 2000 Mercury Grand Marquis belongs on your shopping list.

Using its body-on-frame construction, quiet and smooth V8 engine and rear drive, the Grand Marquis goes out of its way to separate you and your traveling partners from mechanical noise and intrusions caused by the road surface. The suspension and steering actually work well to enhance ride quality, road feel and handling, and for $3000, you get luxury automobile value in a full-sized sedan. That is a deal!