Detailed Review of the 2021 Ford Bronco

The 2021 Ford Bronco is a throwback SUV with updated features and performance capabilities. It has best-in-class torque and best-in-class six-cylinder gas power. The 2021 Bronco borrows the engines from Ford’s pick-up trucks to create an off-roading compact crossover that is sure to make Jeep Wrangler enthusiast think twice.

The Ford Bronco is a classic compact crossover with cultish fan appeal, but is it ready for the big stage in 2021? Well, it has the off-roading chops of a Ford Raptor truck and the DNA of its namesake for good luck. Ford automakers have been accused before of trying to boost auto sales with reboot gimmicks like the Ford Mustang Mach-e, but the Bronco appears to be the real McCoy.

The Bronco comes with advances in technology that make it a contender for best 4×4 of the year. It has best-in-class ground clearance, best-in-class torque, and six-cylinder gas power. It has a new terrain management system and has an amazing trail navigation app that allows drivers to get their kicks on off-road trails without getting lost in the process.

Model Trims for the 2021 Ford Bronco

There isn’t just one type of Bronco. Ford offers 7 different configurations, and each one is unique. The base model Bronco packs essential gear for off-roading and some standard tech features. The Big Bend model adds a leather-wrapped steering wheel, heated seats, and other creature comforts.

Black Diamond and Outer Banks are the mid-level Broncos. If you are interested in off-roading first and foremost, then this is most likely where you’ll start your search. The Black Diamond Bronco introduces Ford’s G.O.A.T. abilities. These are a set of performance enhancements that allow the 2021 Bronco to go over any type of terrain. The Outer Banks Bronco allows drivers to off-road in style by including signature lights and 18-inch alloy wheels.

Next, Ford offers the Badlands and Wildtrak Broncos. These crossover models focus more on performance. The 2021 Badlands Bronco puts the very best off-roading amenities on the table. It has a disconnecting stabilizer bar, rear and front locking differentials, and performance monotube shocks.

Wildtrak builds on the Badlands model with extra equipment that maximizes the Bronco’s speed. The powertrain gets swapped out for a turbocharged V6 engine. The feet get replaced with 35-inch high-performance tires.

The seventh model trim is the 2021 Ford Bronco First Edition. It’ll be hard to get your hands on one of these models because only 3,500 units went into production. Auto enthusiasts will undoubtedly hold onto these because the First Edition models get a grab bag of all the best Bronco features, all on one platform. These Broncos will have the best resale value down the road.

Definitive Style of the Ford Bronco

One of the first things you’ll notice about the new Bronco crossover is the exterior colors. There’s the unmissable Cyber Orange and Rapid Red. Other colors like Area 51, Antimatter Blue, and Cactus Grey give the Bronco a more urban look.

The new Bronco looks very familiar because it has the same proportions as the original. There’s a 2-door and a 4-door version of the Bronco. It sits with a wide stance and has short overhangs. The profile is uncluttered by unnecessary style lines and contours. The flared-out wheel wells can accommodate 35-inch tires. The rear has a modern, streamlined appearance with a spare tire attached to the rear hatch.

Performance of the 2021 Ford Bronco 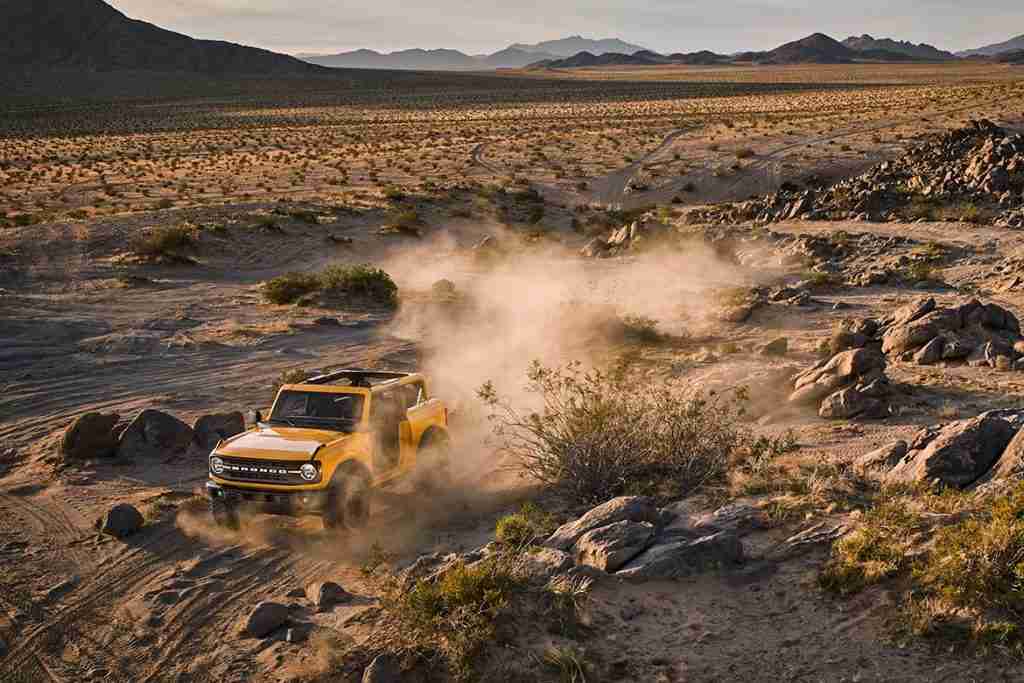 The Ford Bronco crossover shares its powerplant with other Ford vehicles. The base model borrows an engine from the Ford Ranger, but you can get an upgraded version, the same one that’s featured in the Ford F-150. Ford engineers have done a great job of making the 2021 Ford Bronco accessible to all skill levels of driving.

Outfitting the Bronco is like deciding whether you want to play a video game on the easy or advanced setting. The base model comes with a 2.3 Liter Ford EcoBoost four-cylinder engine. It puts out 270 horsepower and 310-pound feet of torque. The second option is the 2.7 Liter V6 engine that has 310 horsepower and 400 lb. ft. of torque.

There are two transmission options, as well. A 10-speed automatic is ideal for those drivers on the beginner track. Savvy auto enthusiasts will cheer for the available 7-speed manual gearbox. There aren’t many new vehicles that allow you to manually shift gears anymore.

Now it’s time to talk about off-roading. There are 2 options for 4×4 capabilities in the new Bronco. You can choose the part-time all-wheel drive. It has a 2-speed transfer case and provides an entry-level experience in off-roading. Toggle between 4H, 4L or neutral in this electronic shift on-demand system.

Then, there’s the electromechanical transfer case of the advanced 4×4 system. This is where you find the G.O.A.T. functions of the terrain management system. It stands for Go Over Any Type of Terrain. There are seven in total – mud/rut, slippery/sandy, Baja, rock crawl, normal, eco, and sport.

You can tackle these terrain types on your own or engage Trail Control and allow the automated 4×4 system to automatically adjust torque, braking, and throttle while you control the steering. The new Bronco has independent suspension both front and rear. You can even hitch up to 3,500 pounds worth of towing. 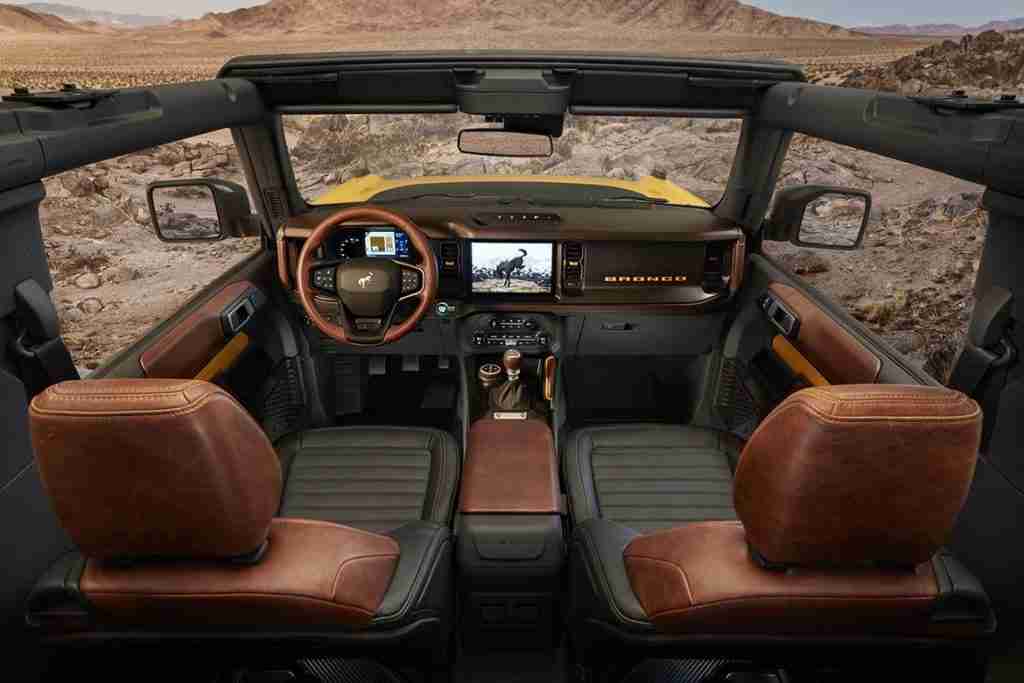 The 2021 Ford Bronco is all about body style and performance. So, don’t expect much from the interior. It’s small and built for the task of conquering the terrain. The soft top 4-door Bronco has 108.2 cubic feet of passenger space. The 2-door model only accommodates 99 cu. ft. When it comes to toting cargo, you can look to the roof attachments for creating more space.

Carpeted floors are to be avoided, especially if you’re interested in taking advantage of the Ford Bronco’s off-road resources. Opt for the rubberized flooring with removable drain plugs and you’ll extend the quality of your interior for years to come.

Just because the new Bronco skimps on creature comforts, that doesn’t mean the interior is empty. The dashboard controls are efficiently laid out and you can equip the Bronco with a leather-wrapped steering wheel. What the Bronco lacks in luxury, it makes up for in technology.

A Bronco with Technology

The 2021 Ford Bronco crossover has two 12V power outlets, 2 USB chargers, and an available wireless charging pad. There’s a 360-degree camera and push-button ignition. The center console can be outfitted with either an 8-inch or 12-inch touchscreen display. In every category, the 2021 Bronco stays true to its nature. The trail mapping feature is like a video game for off-roaders. It syncs up with the onboard navigation and you can use it when you’re online or offline.

Basically, the trail mapping technology gives you access to hundreds of curated trail maps of popular destinations. You can follow a trail to new adventures and have the assurance that this is a well-marked out journey. Then, you can share your experiences online. It’s like the Peloton bike app, but for your Bronco.

When it comes to safety, it all starts with the “Built Ford Tough” logic. The 2021 Bronco uses high strength steel in the vehicle’s construction with additional steel plates placed in high-stress areas. The Bronco has steel plating to protect the fuel tank, engine, and transmission.

The 2021 Ford Bronco has some tough competition. It’s going up against the Jeep Wrangler and Land Rover Defender. So, it’s important that the Bronco undergo rigorous safety testing in the harshest conditions. Ford safety engineers put the new Bronco on some of the most brutal trails they could find, including the same trails used in the King of the Hammers off-road racing competition.

Most consumers want advanced safety gear though. Sadly, the 2021 Ford Bronco remains fixed to the old school approach. It does have automatic emergency braking, lane-keeping assist, cross-traffic alerts, and some pre-collision assistance. That’s about it.

Ford is banking on the fact that someone interested in the Bronco will buy into the tactile, hands-on approach to vehicular safety. It’s a gamble, but some people want less driver assistance and more control. For the Bronco driver, safety and security is largely in your own hands.

Is the 2021 Ford Bronco Worth the Money?

The 2021 Ford Bronco is priced according to the model trim and the number of doors. The 2-door model has an MSRP of $28,500. The 4-door version of the Bronco comes in at an MSRP of $33,200. When you factor in the options, packages, and custom kit add-ons, you can expect to spend way more than the sticker price alone.

Making a Bronco that matches your style and personality is part of the allure though. It’s not a toy, for sure. However, the 2021 Bronco crossover provides the off-road adventure that you’ve always imagined in your head. It can ford rivers and climb rocks so that you can confidently tame the small-batch experiences that you’ll most likely put the Bronco on.

The appeal of the 2021 Bronco goes beyond the trail riding. It’s easy to imagine urban drivers being attracted to the sheer coolness of this crossover. It’s attractive and reasonably priced. The new Bronco might pull some people away from Jeep, too. Most auto enthusiasts will agree that the Bronco is certainly cool enough to get people interested in buying new vehicles again.

Detailed Review of the 2021 Toyota Venza