The 2021 Ford Mustang Mach-E isn’t a muscle car, it’s an all-electric SUV. It’s aimed at providing an affordable alternative to Tesla and other luxury brands. The Mach-E has several model trims, rear, and all-wheel drive, plus advanced infotainment and safety technology. What’s missing is the performance chops of a true Mustang.

Ford’s all-electric SUV, the Mustang Mach-E, has been circulating the rumor mill for years. Ford is finally peeling back the veil and allowing people a chance to get their first real glimpses of the new Mustang electric SUV. There will be a few different model trims – the standard Mach-E Select, Mach-E Premium, California Route 1, the Mach-E GT, Mach-E GT Performance Edition, and a limited run Special Edition.

In a company press release, Hau Thai-Tang, Ford’s chief product development, and purchasing officer said that “the Mustang Mach-E wholeheartedly rejects the notion that electric vehicles are only good at reducing gas consumption. People want a car that’s thrilling to drive, that looks gorgeous and that can easily adapt to their lifestyle – and the Mustang Mach-E delivers all of these in unmatched style.”

Some critics have lambasted Ford for calling the Mach-E a Mustang. After all, the Mustang is a muscle car with an internal combustion engine (ICE). It’s also a coupe and not an SUV. Naming it a Mustang also robs the Mach-E of its chance to develop its own identity in an emerging category of all-electric SUVs. However, this is the first time in 55 years that the Mustang range has expanded and that’s cause enough for celebration. 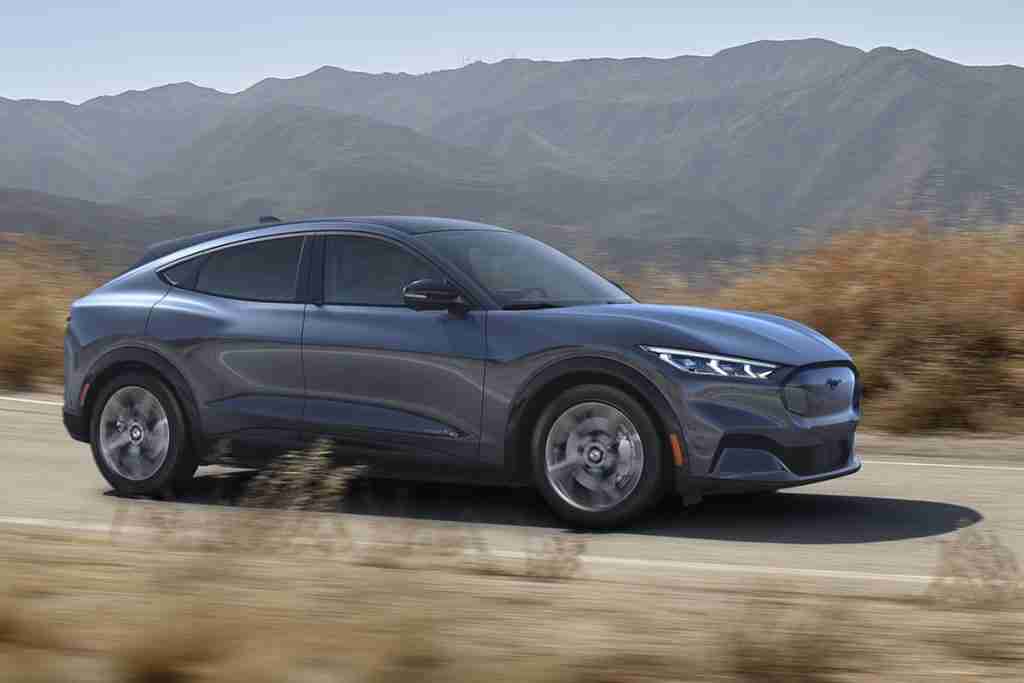 In terms of design, the Ford Mustang Mach-E bears a striking resemblance to the Mercedes-Benz GLC 300 crossover. It has similar lines and proportions to the Benz. There’s very little about the Mach-E that reminds people of a Mustang. That is until you reach the rear of the Mach-E. The Mach-E has vertically-aligned tail lights like other Mustangs and Mustang rear haunches.

The Mach-E has a long hood with an upright front window. The Mach-E SUV also has an available panoramic glass roof, making the interior much brighter than the Tesla Model X. The glass roof also has a UV coating that keeps the interior cool in the summer and warm in the winter.

Since it has an electric powertrain, there’s no need for the Mustang Mach-E to have a front grille. It doesn’t need air intake. Instead, it has a body-color or all-black panel along with the Mustang emblem in the center. That front panel hides a nifty cargo compartment inside. It has a drainable 4.8 cubic foot space that’s ideal for small pieces of luggage or even tubs of ice for a summertime cookout. Don’t worry; there’s more storage space in the back. The rear seats fold down to accommodate 59.6 cubic feet of rear cargo space.

The standard Mustang Mach-E will produce 332 horsepower and 417-pound feet of torque. The Mustang Mach-E GT will be able to go from zero to 60 MPH in under 4 seconds. For an all-electric powertrain, that’s not so fast. The Tesla Model X does it in 2.7 seconds. The Mach-E GT Performance Edition will also incorporate a MagneRide Damping System to further bolster the SUVs handling, but nothing on the spec sheet screams performance vehicles.

There are three different driving modes on the Mustang Mach-E. You can set the powertrain to whisper, engage, or unbridled. Points to Ford on the name choices. These settings allow you to customize the driving dynamics somewhat. You can tighten the steering and enhance the so-called throttle response. Yet, be reminded that this is an electric vehicle and the Mach-E will never deliver the same raw power of an ICE Mustang coupe. Perhaps that’s why Ford has also linked these driving modes to other settings like ambient lighting and animations in the instrument cluster.

There will be two battery options – standard and extended range. You can choose between rear-wheel and all-wheel drive. The Ford Mustang Mach-E will have up to 370 miles of electric driving range between charges, but the average range will hover around 300. That’s a better driving range than the Jaguar I-Pace. The onboard navigation system will have charging stations pre-loaded and the driver will get reminders for recharging at optimal times.

One thing missing from the manufacturer’s specifications is any mention of towing capabilities. That’s not to say that the Mach-E SUV won’t be able to tow. It does have an available all-wheel drive and a ride height of 5.7 inches. Other all-electric SUVs like the Tesla Model X do have towing capabilities. So, the Mach-E should try to compete in this area, as well.

Ford will follow in Tesla’s footsteps with its new SYNC technology. It’s the way that vehicle owner will interface with their new infotainment system. It’s also the way that Ford will provide updates over the air. The SYNC interface will use a 15.5-inch touchscreen and the underlying technology will seek to learn user’s preferences to make the interface more adaptable.

The 2021 Mustang Mach-E SUV has a Bang & Olufsen sound system. It’s incorporated into the interior in a novel way with a soundbar that spans the front dashboard. Drivers will also be able to use their smartphones as a key to unlock the vehicle and start the engine. Other tech amenities include wireless phone charging, park assist, and a 360-degree camera.

The 2021 Mach-E will have some reassuring safety features, especially driver-assisted technologies. An array of onboard sensors and cameras make the Mach-E quite defensive on the road. This all-electric SUV will come with a standard suite of safety features called Ford Co-Pilot 360. It includes blind-spot warnings, cross-traffic alerts, reverse braking assist, lane-keeping, adaptive cruise control, and more.

The Mustang Mach-E has a lot to prove in this emerging vehicle segment. It carries an iconic name that guarantees a thrilling driving experience. The Mach-E should excite drivers and that won’t be easy with performance numbers that already fall short of the Tesla Model X and Jaguar I-Pace. The Mustang Mach-E does have an uphill battle but should provide a smart alternative to pricey all-electric SUVs.